As promised, a short extraction of my WIP for #AStoryAMonth , this one geared specifically to honour Women in Horror Month. 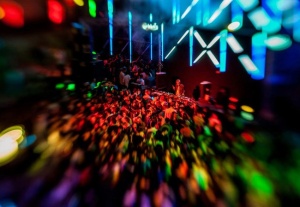 The music is pumping. Thundering. Stomping through my body and amplifying the trembling beating of my heart. Each step vibrates through my bones, undulating, reverberating out from the inside. Shockwaves pounding out to rock hard nipples and flushed genitalia. Every soft spot on my body feels full and raw, every inch of me is wet. I can feel my brain floating in it, untethered and dizzy from the relentless sway and bounce, a ship tossed in a raging tsunami of spinal sauce and ten-ton beats. I don’t know it anymore, but my feet are moving. My legs. My hips. I don’t feel them, but there they go, bobbing and weaving like a goddamn champ, moving to the endless rise of the music. Bigger, higher, faster, stronger. Where else can it go? The roof is holding it in against all perceived laws of physics. It should be tearing at the seams, spinning off into the night as the tornado of sound and rythm and pure fucking sonic fury whips us all up into the stars. The purple is hitting me hard now.

I see familiar faces through the strobe light fog. They wave and shout and smile and nod. YEAH! they say, you fucking GO!. Screaming what I’m feeling in my knees.

DJ Rothstein at the decks. He gives me the high sign as I ping-pong through the crowd, live-wire red and lightning fast, a pinball machine on light-speed. I know I’m headed into the inevitable. I know I’m almost there, but it seems like a lifetime and a split-second, a flash of eternity on a dirty mirror.

Then it’s over. Cardiac Arrest. Rothstein drops the needle flat. Straight cut. Rothstein with his spiky hair and his green muppet parka. He drops a slow-jam for the drunk office girls and lipstick lesbians. My heart is skipping beats like a mambo. Purple shines off of every surface.

I fail to notice that I’ve reached my checkpoint. Mission achieved. Level unlocked. I’m smiling goon-like into the ocean of sweat and flesh. Arturo’s voice growls in my ear as he pulls me down into his booth. The residual spirit sweats of the last song are running warm down my thighs. I hope that’s what it is. I see the Senator’s blood. I hear his voice when Arturo groans Hey Girl, like a low-rent over-flamboyant Ryan Gosling. Ever the charmer-out-of-time, six months to eighteen years late on every joke, lost on every reference. Doesnt stop him from being The Man. I had a problem. Arturo would have an answer. I needed Arturo to have an answer.

And don’t forget to check out the BLOODY VALENTINE blog hop for all of the excellent participating writers and fiends.

And, if you comment here, or on the previous post (where you can leave your personal anecdotes on your worst V-Day or worst date experiences), you can win one of SIX prizes of either my best-selling hardboiled comedy novel HOT SINATRA, or the super exclusive, available-only-here companion collection, DECONSTRUCTING MOSS 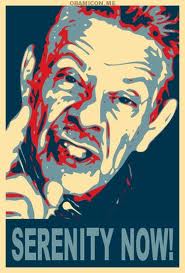 So – obviously – writing a story a week ain’t gonna happen. Don’t take this as whining or excuse-making (not that I can stop you from taking it however the hell you want to) but about 16 hours a day, 5 days a week, I’m either at work, or going to or from work. I get an hour or two a day to spend with my wife and kids. On the weekend, while my amazing wife is at work, I try to spend most of my time with my boys. So trying to juggle my current book projects with an entire finished short story every week is a bit much and will probably lead to me forcing out sub-par material just to make quota.  Not my bag. If I’m going to do it, I’m going to craft it and care about it and make it worth my time.  Let’s be real here.  It took me three years to write Hot Sinatra. Three. Years.

I’ll be honest. Three weeks into January and I almost finished ONE story. The algebra solves itself.

I know there are many among you fellow writers who will decry my lack of fortitude and call me a whiney, non-committal bitch. That’s fine. If you’re one of those people who has a perpetual story machine endlessly cranking into the cold pre-dawn mists, never slowing, never ceasing… more power to you. I certainly wish I could turn it on like a faucet and set my ass down to 3 or 4K per day. You just may be a “better” writer than I. You may be more dedicated than me. Who am I to say?

Me? I yams what I yams, and I know my limitations.

Therefore, I have amended my previous ambition from a story a week, to a story a month. I think 12 stories in a year – good stories, solid stories, finished stories – is a fine accomplishment, especially if I also meet my goals as far as long-form projects go. I’m still struggling with the aches and pains of first-draftery on Keys to Steam and Salvation, and I still have plans for first drafts (or close to) for Für, Sam Hampshire, O’ Sweet Nothin’ and a sequel to Hot Sinatra. I want to have much of this done by WWC 2014 in August so I have them ready to pitch. I think that’s a pretty full slate. It will also give me more room to plan and execute what stories I do write with a more cohesive strategy. I’m currently planning to alternate crime stories with more speculative fiction, starting with something special for next month, hopefully to debut here during the Bloody Valentine Blog Hop on Feb 14.

Also, I’ve realized that it may be something of a folly to post each full story here, especially if I want to  submit them elsewhere later. For most stories, you can therefore expect an excerpt and a small write-up, archived up there under #ASAM. Expect a couple of Moss Cole stories, maybe a Foxy Thunders appearance and at least one story featuring the White Tiger, Captain Lettington of The Queen’s Own. There may be zombie sexcapades, space terror and more coming-of-age awkward shenanigans. There could even be a Sam Hampshire ghost-bust-a-palooza. Who knows? Hopefully there will be twelve stories that knock some socks off.

That’s my story, and I’m sticking to it… for now…

I heard that somebody was high on +Klout in both Henry Rollins and Bacon. I want that +Klout. My life is incomplete without it. So I wrote this story on my lunch break. For +Klout.

Now available in the Lending Library

Alt-Western Awesome at FIRES ON THE PLAIN: Interviews, reviews, articles and new fiction every Friday (look for my story Rosies Chicken & Biscuits in the near future)