I’ll be part of the Beware the Ides of March Multi-Author Mystery Celebration
I’ll probably be trying out some magic tricks and failing miserably!
Schadenfreude opportunity! Or come buy some books.
Yeah. Do that. ABBMB baby! Always Be Buying More Books.

Even if they don’t always have my name on the cover. 😉

We are very EXCITED to announce that Axel Howerton will be part of our Beware The Ides Of March Multi-Author Mystery Celebration!!
Axel Howerton is the author of the darkly funny detective novel Hot Sinatra, and a finalist for the 2014 Arthur Ellis Award for Best First Novel. His forthcoming novel Furr is described as “Twin Peaks meets Supernatural” in the Rocky Mountains. His short fiction and essays have appeared in innumerable anthologies and publications. Axel is also the editor of the anthologies Death By Drive-In, Tall Tales of the Weird West, the Alberta crime collection AB Negative, and the upcoming Sci-Fi Noir spectacular Black Hole Noir. He is currently in the running for this year’s Arthur Ellis, Derringer and Aurora awards.
He is the organizer of the quarterly Calgary crime soiree #NoirBarYYC, a member of the the Kintsugi Poets Collective, and the CSFFA, as well as serving on the board of the Crime Writers of Canada. When he’s not on-duty as a hometown anti-hero, Axel spends most of his time roaming the untamed prairies of Alberta with his two brilliant young sons and a wife that is way out of his league.
Visit him at: www.axelhow.com 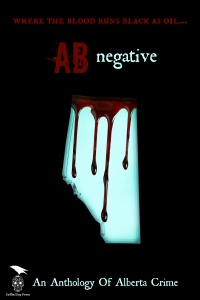 I know it seems pat, and trite, and quite possibly the worst kind of hollow hipness to have emotions about the passing of a celebrity you’ve never met. It seems disingenuous at best, batshit crazy at worst. When you’re an actor, you tend to feel those feels for your legendary icons – the Brandos and O’Tooles and Zach Galligans (Wait, what? He’s not?) As a painter, or a photographer or an artist of any stripe, you mourn the loss of your predecessors, your betters and your gods. Maybe it’s the same for investment bankers and lawyers. It’s more likely that they burn effigies and pray to the Elder Gods, but who knows, right?

I’ll admit, I usually shed at least a few tears during the Oscar night “Those We’ve Lost” segment, and I got choked up, same as you, over Fred Rogers and Captain Kangaroo. They took a little bit of our childhood with them when they headed out the door into the Great Beyond. As a writer, however, my deities have always bled ink and sweat words. I spent a good week in semi-drunken reminiscence of the great HST, who filled my adolescence and misspent twenties with the proper amounts of rebellion and paranoia. I hung my head in reverence when I heard about Richard Matheson and Sendak and Parker and that bastard David Foster Wallace. And you’d better believe I bawled like a goddamned baby when news broke about Ray Bradbury, a man I met, a man I admired, an inarguable GOD among writers. None of those, not even the Almighty Ray, came close to being as heartbreaking as the news today that Dutch Leonard finally took that Big Adios.

I can quite honestly say, with absolute conviction, that I would not even be a writer if it weren’t for Elmore Leonard.

I have loved books as far back as my memory can carry me, digging through musty hundred-year-old tomes in my grandparents dirt basement at four, or five years old. I had apparently more or less taught myself to read by the age of four (with the assistance of Sesame Street and the aforementioned Mister Rogers, as well as the Canadian mainstay The Friendly Giant). I devoured fiction as a child, everything from Madeleine L’Engle to Frank Herbert, Stevenson to Poe, Dickens to Tolkein and all points in between. Leading into, and throughout my adolescence, my interests shifted to film and, as has been frequently documented, I was fully intending to go to film school and become part of the new wave of auteurs of the 90’s. That didn’t quite happen. What did happen, was that my lifelong love affair with dark, yet funny fiction, typified by Elmore Leonard, led me back to the written word and, eventually, to my first novel, HOT SINATRA and characters like Foxy Thunders and Manlove & Kickerdick. I lay all the blame, and give all the credit, to Dutch.

My first Elmore Leonard experience was stumbling across an apparently dog-eaten hardcover copy of Double Dutch Treat, a triple-feature of early Leonard crime novels The Moonshine War, Gold Coast and City Primeval. I’d been out skulking around the pawn shops and 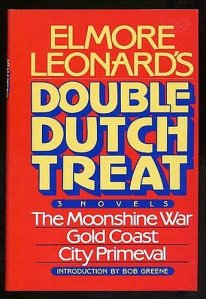 second hand stores on Edmonton’s 99 street strip. I was twelve. I had a hellacious high reading level, I’d been sneaking my (other) grandmother’s paperback copies of Stephen King and Robert McCammon, and had even snuck a few steamy bits nobody new about – Jackie Collins and torrid “romance” novels full of ripped bodices and throbbing cocks. But this book, this big, fat, red beast of a book… this was real-world shit, man. Sultry babes, dirty crooks, hard Detroit brothers committing murder and robbing white dudes in suits. No imaginary worlds, living cars, creepy ghost twins, vampires or werewolves, no magic, no florid descriptions of female genitalia I’d yet to see and couldn’t quite fathom as real. This was brutal, final, bust-ups in a downtown alley, real-world shit. And it was funny. Funny like Richard Pryor movies and Rockford Files, but also real, like it could be going on in that house down the street, the one where the lawn was mostly gravel, and the fence was rust-blotchy galvanized steel, with that powdery white crud that tore up your jeans. The house with the peeling paint and nobody ever came out through the front door, always the back, and always three different junky fords parked behind it, right up into the yard and close to what must have been the kitchen. It scared the shit out of me, man. And it was exhilarating.

I picked up new Dutch books wherever I could find them – used book stores, garage sales, flea markets – usually they wouldn’t sell them to me at the bookstore, not until I hit sixteen or so, by which time I was engrossed with the pretensions of youth, showing off with Kerouack and Henry Miller and special order copies of Naked Lunch. I always went back to Dutch though. Throughout all of my varied love affairs with different genres, I always went back to Dutch. Maximum Bob, Mr. Majestyk, 52 Pickup, Stick… and I was always buggered at how many of his books were made into movies and nobody knew. Then came Get Shorty and Rum Pun… I mean… Jackie Brown. Then people started to really pay attention to old Dutch.

By the time I’d come out the other end of my failed non-attempt at a film career, gone through University, wasted many a year in retail jobs and half-careers in Records and Warehousing and Bullshit and Junk, Dutch was still there, my shelves bursting with hardcovers and softcovers, paperbacks crammed into every crevasse, spilling out in the corners, I was as enamored with his westerns and his short stories and his general attitude and workmanship that I thought I’d take a crack at writing again. Then he became my teacher. The dialogue, the characters, the layered emotion and barely-checked fury that pushed dudes like Ordell Robbie and Louis Gara and Ray Nicolette and Judge Bob Gibbs and Dennis Lenahan and Raylan Givens and Richie Nix and the goddamned Blackbird, to do the sometimes-crazy, always dangerous shit they do. He gave us strong women like Karen Sisco and Carmen Colson and Jackie Burke. Go read the title story of When The Women Come Out To Dance to see one of the best examples of a man writing female characters properly.  There is also no better treatise on writing than his 10 Rules of Writing.

I’ve spent so much time with Elmore Leonard over the years, I honestly do feel as if I know the man, even a very little bit. I feel his lessons in my bones when I set out to write, especially when I hear the dialogue rattling off between two characters. I’ve watched his interviews and studied his style. He’s the only author I ever deigned to order an autographed book for. Every other signed book I have, I met that writer face to face and took their measure for myself before asking for that little secret symbol, that seal of brother (or sister) hood hidden between the front pages of their blood and sweat. Dutch Leonard is the one writer that I couldn’t take the chance of never meeting, of never having that little personal connection to. So I sit here now, with a scotch in one hand, lightly salted with stray tears, and find myself stuck on that page, in the front of a pristine copy of Mr. Paradise, with his scribble under the title. I can’t bring myself to turn the page until I’ve put these thoughts down and given him the time he deserves. The time he earned with more than 40 books and a career that lasted six decades. Here’s to ya, Dutch. You are already missed.