FURR is now available for pre-order on Amazon! 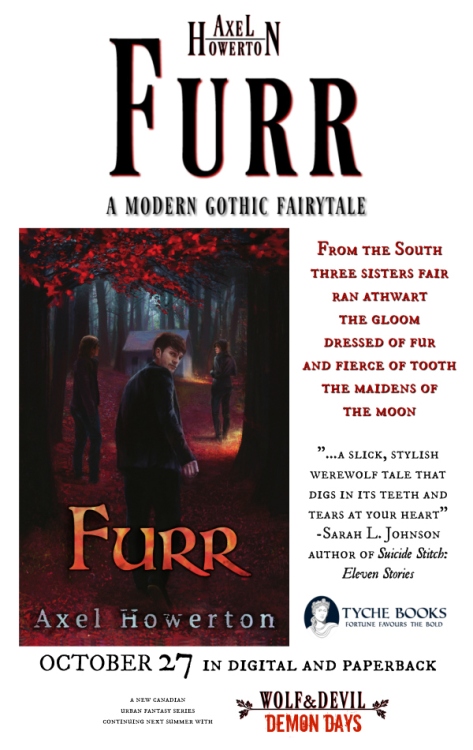 So it’s Indie Author Day… apparently… I’m hearing about all kind of events and activities in Edmonton and beyond, but haven’t come across anything planned here in Cowtown. It seems to me to be a recurring problem. One of the reasons I throw the #NoirBarYYC events (next one October 18, btw… come on down!) and one of the reasons I put together and published the AB Negative anthology. While we’ve got some amazing events, namely the annual When Words Collide conference, there seems to be a real dearth of writerly events and community support compared to our northern capital, or even smaller burgs like Lethbridge, where they just held a Word On The Street event. I love Calgary. I’ve lived here since I was thirteen years old – nearly thirty years, for those of you keeping score – and I’ve spent all but three weeks of that thirty years right here in my own home town. Like the song says, it’s “the best hometown I know” (and if you’re from YYC, you know exactly of what I speak.

I went to Balmoral Junior High, that oddly displaced sandstone behemoth, an Edwardian relic still holding court over the middle of 16th avenue. Me and my friends snuck into

Calgary Dinos basketball games, hung out in Olympic Plaza during the games in 88, saw movies almost every weekend at the London Town Square and Sunridge theatres. I lined up for midnight screenings of Dick Tracy and Batman at the little theatre that was cross from Lougheed Hospital. That was the hospital they took me to when I was mowed down by a Honda Civic outside of the Village Square Leisure Centre. I took the C-train downtown and caught a bus up Centre Street to get to Crescent Heights High School. We used to shoot cheesy horror flicks in Princes Island Park. We got dirty looks from passersby as we chased each other with plastic axes down the pedestrian bridge and dumped buckets of fake blood in the grass. We would sneak out in twelfth grade, slide over to the Studio Cafe for cappuccino and cigarettes and write mad, bullshit, teen poetry. I lived in Falconridge and Pineridge and waaaay north in Sandstone, when Sandstone was as far North as you could go. I went to the U of C, took classes at SAIT and Mount Royal. I worked for nearly a decade at the historic North Hill Cinerama, dangling from that godforsaken billboard hanging over the Trans-Canada, fighting off pneumonia in the rain while working the three-block ticket line outside… I was the infamous “showman doorman” who would do impressions and make announcements to the sold-out crowds. I hung out at Another Dimension and drank coffee at The Roasterie in Kensington. I was in a mostly-terrible band in the 90’s. We called ourselves Addams Family Bitch. We played divey sports

bar Sunday jams, and wowed the 3pm crowd at the Ship & Anchor. I used to frequent the Westward Club and then the Night Gallery, and always, always, the glorious dark corners Republik. There were a couple of summers I spent more time there then at home – watching Wagbeard and The Primrods and The Smalls. We’d close down the Republik, then meet up with our bartender pals from The Warehouse, and drink at the Ship until dawn, then pass out for a half hour on benches in front of the Knox United Church while we waited for the bus  back to the hood. Or we’d leave the club at 2AM, ears ringing, heads buzzing, and crawl into a booth at the Husky House for pancakes and many plates of bacon.

When I moved out on my own, it was straight into the glory of the beltline, blocks away from downtown in places like The Marlhurst by the Lougheed House, and in that godawful take-out box behind the world-famous Calgary Tower. I lived just off 16th Avenue and 4th Street in a run-down basement suite and worked in a cubicle in Bankers Hall, eating lunch on Stephen Avenue and hitting the myriad of pubs down that magnificent stretch of road.

Things changed, as often happens with Life and, with a wife and a baby on the way, the smog and concrete of dowtown Cowtown didn’t seem so comforting and secure anymore. I moved on up to a dee-lux apartment in the skies of Signal Hill, where there was more green and less noise. I worked more, spent my nights with my family, partied and socialized less and less. Over the last decade-plus, in many ways, I’ve lost my connection to the city that done grew me. Taking my eleven-year-old out for his birthday a few weeks ago, wandering across 17th Ave from the Stampede grounds to Tubby Dog, and north across downtown to jump on the C-train, it occurred to me that I barely recognized my own city anymore.

Getting back to the Indie Author Day thread – I wrote a story in AB Negative, about a drug

dealer named Devil, in an unnamed part of town (which was actually Bowness). I wrote a story about a couple of dudes kidnapping a crazy old cat lady from a house in Victoria Park (a Victoria Park that is now being overhauled into something new and shiny and completely contradictory to the shanty town in my story). I wrote a book last fall, that comes out at the end of this month… Furr… a modern gothic fairytale that starts out in that same Bankers Hall cubicle, and that same take-out box high-rise. I’m starting a new series right now, springing forth from Furr and starring that drug dealer (who also pops up in Furr). It’s set right here in the best hometown I know. I’m seeing that I need to rebuild that relationship, rediscover my home, and my place in it. Especially if I want to tell the story of Calgary, as well as the tale of the Wolf and Devil.

So what I want to ask, on this special Indie Authors Day, where your own Hometown Anti-Hero is about to examine our shared community and put it down in pages full of action, love, hope and unbound weirdness – tell me what YOU love about this town. What do YOU think I should feature in the new books? What places and stories and memories do you have, that bring this city of ours to Life? Comment below, drop me an email… tell me what Calgary means to you.

And come on by the book launch for Furr on October 27, or Indigo at Signal Hill on October 28 to support your own local Indie Author

I’ll be part of the Beware the Ides of March Multi-Author Mystery Celebration
I’ll probably be trying out some magic tricks and failing miserably!
Schadenfreude opportunity! Or come buy some books.
Yeah. Do that. ABBMB baby! Always Be Buying More Books.

Even if they don’t always have my name on the cover. 😉

We are very EXCITED to announce that Axel Howerton will be part of our Beware The Ides Of March Multi-Author Mystery Celebration!!
Axel Howerton is the author of the darkly funny detective novel Hot Sinatra, and a finalist for the 2014 Arthur Ellis Award for Best First Novel. His forthcoming novel Furr is described as “Twin Peaks meets Supernatural” in the Rocky Mountains. His short fiction and essays have appeared in innumerable anthologies and publications. Axel is also the editor of the anthologies Death By Drive-In, Tall Tales of the Weird West, the Alberta crime collection AB Negative, and the upcoming Sci-Fi Noir spectacular Black Hole Noir. He is currently in the running for this year’s Arthur Ellis, Derringer and Aurora awards.
He is the organizer of the quarterly Calgary crime soiree #NoirBarYYC, a member of the the Kintsugi Poets Collective, and the CSFFA, as well as serving on the board of the Crime Writers of Canada. When he’s not on-duty as a hometown anti-hero, Axel spends most of his time roaming the untamed prairies of Alberta with his two brilliant young sons and a wife that is way out of his league.
Visit him at: www.axelhow.com