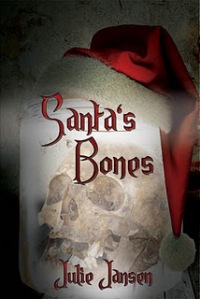 My old Coffin Hop compatriot Julie Jansen has written one of the great new Holiday classics. It’s called Santa’s Bones and it is an absolutely joyful and triumphant piece of SFF mischief and mayhem. It has been released TODAY by the discerning gentlepeople of Muse It Up Publishing, just in time to put on that Kindle you just picked up for Grandma’s stocking.

The crooked Leader of the Northern Territories plans to pose as a political Santa Claus to spiff up his tarnished image. On Christmas he’ll fire up his teleportation jet to deliver 206 presents across the world. And these aren’t just any presents. They’re reliquaries, beautiful jewelled containers each housing one of Santa’s bones.

The Leader assigns funeral director Merlin the task of creating the reliquaries.

For Merlin it’s a dream job.

For his assistant Joseph, it’s an abomination.

To celebrate, Julie is giving away FOUR!! Prize Packs including copies of Santa’s Bones, the WTF? Anthology featuring Julie’s story A Song of Fire & Ice (Cream) and copies of my novella Living Dead at Zigfreidt & Roy

Seems Julie’s been having some ghostly ghoulies terrorizing the family homestead and she asked me for advice. Being my typically useless self, I basically just talked about me. Check out Julie Jansen: Science Fiction and Horror Writer to see my responses, and add your own thoughts to win!

Then groove out to the goddamn KINKS! 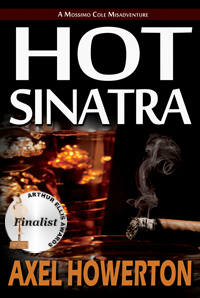