Get the hell in the way-back machine and check out a brand new Mickey Spillane for Twenty-Eleven!

How is this possible, you may well ask? Mickey Spillane has been dead for 5 years, you say? Well, shut your mouth and open your ears, Sunshine. Here is the tale:

Way back in 1967, Crime writing legend Mickey Spillane created a new character he was hoping to turn into a new franchise like his already popular Mike Hammer. Going with the fads of the time, Spillane made his new hero a sexy, swaggering super-spy/thief/government agent a’la Ian Fleming’s 007. The result was Morgan ‘The Raider’ – a suave, sexy criminal, ex-military, thief extraordinaire. The book was called The Delta Factor and was a fairly big hit. Unfortunately, Hollywood got hold of it and created a slapdash stinker of a film version that basically killed The Mick’s interest in the character. Fast forward 20 years and Spillane bequeaths his unfinished works to his young pal, Max Allan Collins (writer of The Road To Perdition) who has now dug out a long-abandoned sequel, dusted it off, and filled it out with suitably Mick-like prose, two-fisted action and a bevvy of sexpot dames.

The story picks up about a year after the action of The Delta Factor, and begins with a vague recap of how Morgan ended up in dutch with the government and how he has just escaped from federal custody. From there, as befits a Spillane thriller, We’re off to the races with nary a page passing without some serious action of one kind or another. Morgan is sheltered from the Feds by some landed Cuban revolutionaries, who engage him to help them track down a thief named Helasquez who has absconded with their hard-scrabbled $75 G’s. Morgan apparently has nothing better to do, and the game is afoot, with high-class hookers, shady assassins and the usual parade of miscreants and ne’er do wells.

All of this moves at breakneck speed and the book proves a quick, easy read, filled with action, excitement, sex and intrigue – all of it in a most convincing Mick patois. Max Allan Collins has more than risen to the occasion and delivered a note-perfect Spillane book from what he was left by the great man. This is by no means a new game (see Robert Parker’s excellent completion of Raymond Chandler’s Poodle Springs) – indeed Collins has already published a handful of these mash-ups, including Dead Street, The Big Bang and Mick’s final book, the post-9/11 novel The Goliath Bone – but Collins plays it well and plays it safe, never wandering far from the accepted pattern of Spillane’s lifetime of work. The hero is square-jawed, handsome and irresistible to the ladies. The dames are leggy, stacked and full to the brim with desire – jungle cats ready to pounce. The criminals are mysterious and elusive and the sidekicks and bit players are witty and convenient. The plot is standard 60’s Bond-lite, and the prose is exactly what you expect; but that’s the point, right? Nobody picks up Mike Hammer expecting to read Gogol. You pick up Mike Hammer because you want to imagine yourself as a “manly” man, desired by women, feared by men, always having the right instinct and always being tougher than the other guy. This is man-time and it’s just like The Mick used to make.

Pick it the hell up and buy it a drink, why don’t ya? Two damn thumbs straight the hell up. 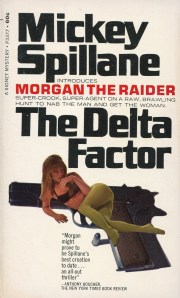