First rule of #CoffinHop Book Club? Don’t go out in the woods in the dead of winter! And you sure as shit don’t drag your little brother into that creepy fucking solitary cabin, just sitting there in the middle of the snowbound mountain pass. That is just asking for trouble, man. Asking for it.

Fortunately for us readers, in Anne Michaud’s tense, chilling (in setting and tone) and magnificently terrifying new book – HUNTER’S TRAP – the Mulligan boys ignore that advice when searching for their missing father and his hunting buddies as the first big snowfall hits in the treacherous mountain nightmare that may just become their final resting place.

Filled with edge-of-your-seat suspense, thrill-a-minute terror, and horror beats that Stephen King himself would be jealous of, HUNTER’S TRAP is a masterful blending of familial strife, brotherly love, small-town creepiness and supernatural fear that will have you turning pages almost as fast as your heart will be pounding while reading them. 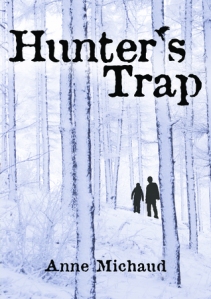 “Ghosts don’t believe in you, either.”

Seventeen-year-old Dayton Mulligan is stuck looking after his little brother Jeremy when their father goes off on his annual hunting trip. But when Dad’s last phone call ends in a shotgun blast, it’s enough to send both boys out into a blizzard to search for him.

Caught in the killer weather, Dayton and Jeremy take refuge in an abandoned hunting cabin, which isn’t as empty as it first seems. A ghost inhabits its walls and promises to reveal the truth behind their father’s disappearance, but the brothers doubt their host’s sincerity as the spirit demonstrates its hatred for anyone who trespasses on its land.

Far from the safety of civilization, Dayton must swallow his fears, fight for himself and for his family before it’s too late and Hunter’s Trap claims them all, forever

Tense, taut and terrifying, yet full of dramatic weight and beautiful characters, HUNTER’S TRAP is well worth a buy.  Pick it up at AMAZON or look for it on Anne Michaud’s site (also a #CoffinHop per)

Stay cool and stay Hoppin’, and remember to enter the #COFFINHOP DEAD POETRY SLAM for your chance to win a plethora of dark poetry, and comment on any of my posts to be entered to win the Mystery Swag Bag!