The 1st Annual Axel Howerton Coffin Hop Art Show also resulted in a mad tie, but subsequent votes by my board of directors (my 4 and 8 year-old sons) awarded the prize to Joanna Parypinski for her entry, “Pumpkin Family”. Jo wins a copy of DEATH BY DRIVE-IN and a boatload of swag, including my own painting “Hipster Leatherface”.

The winner of the Coffin Hop: Best in Hop 2013 Reaper Award is Amy K. Marshall!
Amy wins the annual Reaper Award (previously bestowed upon Coffin Hop co-creators Julie Jansen and Axel Howerton in 2011, and Red Tash in 2012), as well as a copy of DEATH BY DRIVE-IN and much more! 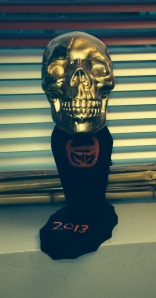 Finally, the last big prize for this year (and I know I’ve been shuffling them around. I’m old and my brain don’t work no good no more)

A million thanks and eternal wellwishes to everyone who participated in this years event, and even more of my heart is divided up between everyone who helped create, and now promote, the COFFIN HOP: DEATH BY DRIVE-IN anthology, which truly benefits an incredible cause in www. litworld.org

If you haven’t already, go buy your copy today and help support child literacy around the world!