W.P. “Bill” Kinsella passed away yesterday. Most people only know him as “the baseball guy”, the one who wrote Field of Dreams. Bill did write about baseball, as one of the fundamental touchstones of the cosmos, and as a metaphor for humanity itself. He did write the book they based that movie on. As much as I love that movie, I love the book, Shoeless Joe, so much more. I love the short-story collection that started all of that Shoeless Joe Jackson Comes to Iowa even more. A year or two before the Kevin Costner movie made Kinsella a notable name in worldwide literature, a curious weirdo of a 12 year-old kid was wasting a lonely afternoon in a sketchy second-hand shop on 149th Street in Edmonton. In between beaded belts, Black Sabbath t-shirts and Don Ho records in milk crates, was a little bookshelf, mostly filled with Stephen King books (which that kid had already read) and Harlequin romances. Right in the middle where they met was one dog-eared copy of Shoeless Joe Jackson Comes to Iowa.

Ten-plus years, hundreds of books, and what seemed like a lifetime later, that same curious weirdo was stumbling towards the idea of being a writer – professionally – since he never really stopped writing, never could quit, for more than a day or three. He’d published a few stories as a teenager, written poetry every godforsaken day of his adolescence and throughout the post-pubescent angst that followed. He was loaded up with literature classes at the U of C, read widely and (what a 20 year-old) assumed was deeply. Wandering the book festival promenade one late-summer, early fall afternoon, he caught sight of a poster that said W.P. Kinsella – 3PM, or something along those lines. The kid ran home 9 blocks, up to the 8th floor apartment he shared with his girlfriend (now wife) and dug through a mountain of paperbacks and coffee table books, boxes of novels and short story collections and horror anthologies, but he just couldn’t find that damned book. That copy of Shoeless Joe Jackson Comes to Iowa that had been his entry to a different kind of writing, a weirder, softer kind of literature that didn’t feature rabid dogs, haunted hotels or aliens bent on human extinction. He couldn’t find the other ones either, the baseball collections like The Thrill of the Grass, or The Last Pennant Before Armageddon; not the “Indian” stories in Moccasin Telegraph and Dance Me Outside; not even the novel of Shoeless Joe. The only Kinsella he could find with time to get back to the park was the chewed-up copy of The Iowa Baseball Confederacy with the Field of Dreams cover. Somehow it felt like a betrayal, to take the man that book, with that cover – the cover that made no sense and used his magnificent words to advertise a movie that wasn’t half as beautiful as the other books that it came from.  It felt dirty and disingenuous and wrong, but it was the only goddamned book he could find.

Bill Kinsella gave his lecture, mostly on the miserable state of publishing in the mid-90’s, as Conglomerates ate up publishers and shat out fine, mid-list writers like so much half-chewed goat-cheese pizza. He also read a story, and enchanted the scant twelve people wise enough to be in the tent at the time. Unsuspecting moms with strollers, teenage lovers holding hands, fat theatre managers hustling to work all passed by, mere feet away from more magic than they would probably gather in a lifetime.

Bill signed that book. That shitty, worn-out copy of a fabulous novel with the worst mis-matched cover possible. He smiled and he chatted with the weirdo kid, found out he was a stumbling writer of poetry and a student of the art of words. Turns out they were both from the same place as that copy of Shoeless Joe Jackson Comes to Iowa. Two boys from Edmonton, not all that far from home. He talked frankly about the tough road ahead, the years of obscurity, the howls of depression, the inevitable moments of doubt. Then he signed that book. He signed it Go the Distance. Those famous words from that other book. The one they turned into that famous movie, the one thing he’d be most remembered for. Probably the way he signed every book that somebody shoved in his hands and said “Oh my god, I loved Field of Dreams!”

Maybe, the weirdo kid thought, maybe he thought that’s what I gave him to sign, what with the stupid mis-matched cover and all. The kid kept talking to his hero, all mumbled questions and awkward questions. Bill was kind, and funny, and his own kind of awkward and shook the kids hand, and smiled behind his glasses and his Colonel Sanders goatee, and the two eventually went on their separate ways.

It wasn’t until I got home that I found the card inside that book, the one with his address on it, the one that had keep in touch scrawled on the back.

I did, and we corresponded for a year or two, back in those heady days when you still put paper in an envelope and waited two months for a reply.  Bill was lovely enough to read some of my poetry, and give me some pointers and continued encouragement. We lost touch before he had the accident that stopped him writing for a long time, and I always wish I’d still had his number to say hello.

We reconnected once, years ago, when I saw him at another lecture in BC and he was older and whiter and just as quiet and unassuming as ever. I was just as awkward and weird. 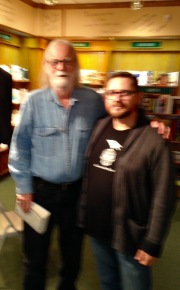 The last time I saw him was just last fall, when he was back in Calgary, touring The Essential W.P. Kinsella. I didn’t buy it, as I already have every single one of his books on my shelf, half of them signed, all of them treasured. I bought four copies for other people, like my father-in-law who’s a baseball coach, and my pal Scott Dammit who loves Richard Brautigan as much as me and Bill. I got one blurry iPhone photo of us together.

Bill came a little late, looked a lot more worn and thin. He remembered me, but not my name. He told me he was tired. He finally signed that old copy of Shoeless Joe Jackson Comes to Iowa. I put it on the shelf right next to the book he signed that day at the book festival, the only book I could find. That book with that cover. The one that has become my most favorite thing of all.

I spent the morning today reading Bill’s stories, saying goodbye. I wrote a little something, which I almost never do… I wrote poems for my grandparents when they died, and my uncle who passed away. I think I wrote one when they killed Captain Kirk. Not even for our Lord and Saviour David Bowie (although I am putting him in a novel with my great-great grandfather who died in WWI). Anyways, the point being that I don’t trot these out for any old somebody who goes away… but this was Bill, and I wouldn’t be here, still fighting to Go the Distance.

Leaving, as he always did,

When he was damned good and ready

It broke my heart a little to hear it

At the idea that he chose to leave us behind

Those cracks were already forming

The last time I saw him

Tall and thin as ever

More crooked and folded and dog-eared than I remembered

Bill told me he was tired

And I nodded, as one does

A long time ago

About the music of words

About the magic that glows behind life

Bill taught me about love and loss

and the hanging curve

and the terrible joy of hitting it square on

and the writerly things about writers

Because that’s what he was

He took me on trips to Frank Pierce, Iowa

and Hobbema and Vegreville

and the weird back rooms of Vancouver

I rode with him across pages

from our own hometown in Alberta

to the jungles of Courteguay

and Dennys Kelly turned into a wolf

Bill showed me the world

with all of its cracks

and the magic glowing red underneath

and the thundering tempo

and the seventh-inning stretch when we all get to look

and feel the heat on our face

Enjoy the next game

and save me a seat