You can now pick up the deadwood version of our BFF Scott S. Phillips’ epic tale of soul-searching and redemption, Squirrel Eyes. 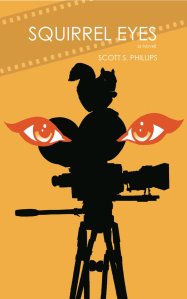 “If you somehow cloned the perfect science bastard love-child of Cameron Crowe, J.D. Salinger and The Kinks, it couldn’t build a better story of underdog charm than Squirrel Eyes. Scott S. Phillips creates fascinating and endearing characters, then drops them in the hot zone of their own mangled lives, with nothing but their wits and pop culture to protect themselves.”

“Squirrel Eyes is a crazy journey through Scott S. Phillips’ twisted, pop culture cluttered mind. He touches on universal emotions in this insightful, often laugh-out-loud journey through Alvin Bandy’s – and the reader’s – most denied memories of love lost.”

“With his goofball characters, ear for quirky dialogue, and always-colorful turns of phrase, Scott S. Phillips is like a modern beat writer – tempered with postmodern sensibilities and a generous dash of observational comedy… But that’s just an erudite, flashy way of saying that no one makes me laugh louder or harder than Scott S. Phillips.”

“Scott’s narrative blasts and rattles down the road, chasing rabbits and stray chickens out of its path, while his dialogue sprays the countryside like full-automatic fire.”

I’m with that first guy. This book kicks ass and takes names. Find it. Buy it. Read the shit out of that motherfrakker.

Available on Kindle, iPad, Nook  and ePub as well as the paperback version.